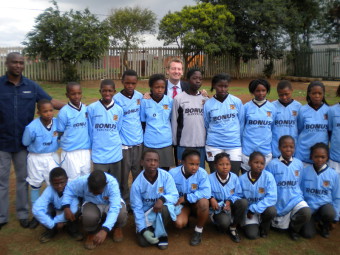 In 2003, Matthew Hornshaw became an English FA qualified football coach in order to coach his eldest son's school class in a safe, organised and credible environment for 6 year olds. His love of football and desire to pass on knowledge and fun to children has become a passion and this has shaped his thinking ever since.

Following visits to various African countries and picking up on their love of the beautiful game, it was obvious that football played a big part in life. Men, women and children watched and followed football with a passion and it became obvious that here lay the opportunity to form a wonderful and fulfilling partnership.

So, with help from local football clubs, parents and players, Matthew set up an inititiative to engage with local African schools and Kits 4 Africa was born!

Following discussions with the British Council South Africa, Matthew linked with local schools to see if he could help them with anything football related that would aid the children in engaging with each other, their teachers and the local community.

As 2010 approached, the first ever African World Cup was looming and David Beckham was in town! Matthew joined forces with the British Council South Africa and, with fantastic support from Hull City AFC, one of the club's old junior team kits was handed over to a school in the townships of Johannesburg. With the fantastic help of local football clubs, including Cottingham Rangers and North Ferriby United, and from local professional club Hull City AFC, Kits 4 Africa had gone soccer mad!

This was only the start and now Kits 4 Africa has moved on to Ghana and Nigeria and is beginning to collect supporters and benefactors. Plans to stage local small sided competitions between schools are afoot and already coaching has been undertaken in Ghana.