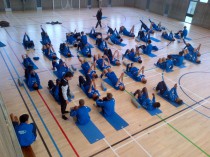 MGH Educonsult has recently been involved in the planning and organisation of the 2013 pre-season academy camp for our close partner, Brooke House College Football Academy. The 5-day camp took place in Hull and the group of around 50 were accommodated at the all inclusive Lawns Campus of the University of Hull where they were extremely well looked after by the ever attentive campus staff. Most of the sessions during the week were held at the university's Sports & Fitness Centre, and thanks must go to all of the staff there, especially Steve Curtis (Sport Development Manager) for their support and assistance at all times.

The group was made up of new and experienced squad players many originating from outside of the UK and a number coming to the UK for the first time. For some it was rather a shock to be dropped into the start of an English autumn with mixed weather welcoming the group to their lodgings. Academy Manager, Ben Watts, oversaw what would be a taxing week with the academy's strength & conditioning expert, John Cross, taking control of many of the sessions. John is semi retired now but works closely with Leicester Tigers rugby club and has been part of Nigel Pearson's backroom team at both Leicester City and Hull City. A full complement of coaching staff were on hand including Luke Maher (Assistant Manager), Dan Bale, Shane Goddard and Tom Johnson.

Each day commenced with fitness sessions held at the Lawns from 0630, a good way to start the day before a hearty breakfast and setting off to the main university campus at 0900. Warm ups, stretching and group exercises led by John were most welcome as each day became more arduous. Football sessions and work on various muscle groups followed warm ups and as the week progressed the group began to bond. The worst part of each day for the group? The end of day ice baths were never welcomed but the boys understood the importance of getting rid of that lactic acid in order to feel refreshed and ready for a relaxed evening! A brief respite on the final day when the university Department for Sport, Health & Exercise Science played host to the group to show them how the department work with professional athletes and how science is a critical element of today's performances on the track, in the ring or on the pitch and court. The group were treated to a session in an acclimatisation room...the environment being set for the boys to experience the conditions the world's top footballers will face in Qatar for the 2022 World Cup!

As the final evening approached, the boys were also practicing for the Brooke House Has Talent event, something not to be missed and also a great bonding opportunity for boys and support staff alike. Give them their due, every boy took some part and even though many of the acts could not be described as polished, they were extremely entertaining!

So as the final hours drew close, the group packed their bags and headed off for the waiting bus. The week was very successful as Academy Manager Ben Watts confirmed and he had nothing but praise for everyone involved. When the group returned to their base it was the academy coaches job to carry the boys forward and allocate them to 3 squads of players; each playing at a different ability level with the Elite Squad facing a number of professional football clubs during the season. Recent seasons have seen games against Manchester City, Fulham, Newcastle United and Hull City and the standard of opposition will remain as high for this season.

MGH have been extremely grateful for the collaboration provided by Brooke House College and Academy and will be assisting in sourcing games, trials at professional clubs and progression routes onwards for players and students at the college for the coming year